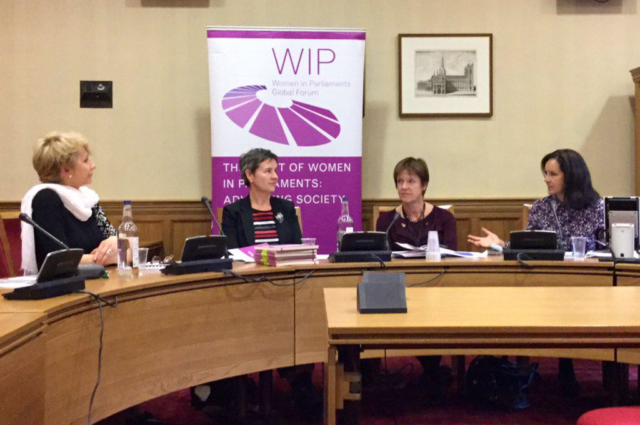 The Women in Parliaments Global Forum (WIP) held a debate on 20th October 2015 in the Palace of Westminster.

The cross-party high-level panel, consisted of:

The debate was hosted by Baroness Mary Goudie, Member of the House of Lords and active gender equality campaigner. The joint WIP-World Bank study, “The Female Political Career”, which reflects survey results from 84 countries around the world and is designed to understand the hurdles women face in launching and sustaining successful political careers, served as the basis for the spirited panel discussion on how to increase the number of women in politics.

The energetic and engaging discussions touched upon a wide-range of significant political and social issues; from the accessibility and image of modern politics, the duality between family and political life, right through to captivating debates around hot topics such as all women-shortlists. Discussions were then opened up to the audience. Here aspiring politicians and current Members of Parliament were given the opportunity to quiz the distinguished panellists. Issues such as the importance of a gender balance in ministerial positions were enthusiastically debated and left the audience with much to ponder upon.

Despite the party differences the panellists found much common ground to discuss, which made for very open and honest discussions, as well as tremendously dynamic debates around some crucial issues. The informed and compelling back and forth between the high-level panellists left little ground untouched and much food for thought for all present.

The talks ultimately highlighted the need for studies, such as “The Female Political Career”, for informing policy and raising awareness of the issues and statistics concerning women’s participation in politics around the globe, which one audience member described as “staggering”.

After the event panellists remarked on social media that the study and the debate itself should be praised for “highlighting the challenges all UK Parties face in increasing the number of female MPs at the next general election”.