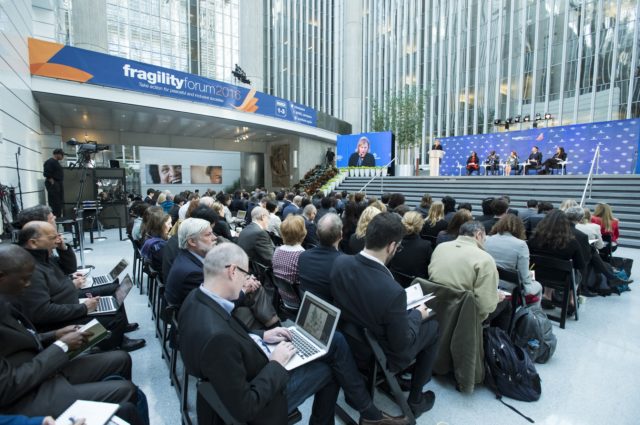 When a country undergoes violence and conflict, both men and women suffer from it. Yet women are excluded from peace negotiations. According to UN Women, only 9 percent of peace negotiators are women. As a result, many of the agreements that come out of such negotiations promptly fail.

With this reality in mind, Women in Parliaments Global Forum (WIP) and the National Democratic Institute, under USAID’s Global Women’s Leadership Program (GWLP), brought a delegation of women parliamentarians to the World Bank Group Fragility Conflict and Violence Forum 2016 (also known as the Fragility Forum) in Washington, DC on 1-3 March. This was the second GWLP delegation organized jointly by NDI and WIP. The first delegation attended the United Nations Climate Change Conference (COP21) in Paris in December 2015. The objective of this GWLP delegation was to forge coalitions and expand networks. This will enable the MPs to better address issues of fragility and conflict in their home countries.

First, the delegation participated in an advocacy and message development training, facilitated by the Institute for Inclusive Security. This workshop enabled the GWLP parliamentarians to be prepared to engage at the Fragility Forum. They attended dozens of panels and participated in various important discussions. This will improve their work in their home countries. One of the delegates, Clara Rojas, spoke at the Gender Disparities in Fragile States Panel. She shared the political, social and economic challenges that women in Colombia face.

The GWLP delegation was welcomed and hosted by Saroj Kumar Jha, the Senior Director for the Fragility, Conflict and Violence Group at the World Bank. In his remarks, he strongly reaffirmed the role of women parliamentarians in solving the issues of violence and conflict. In the final plenary of the Fragility Forum, delegates made powerful closing statements. Their remarks responded to the six development challenges posed by the World Bank President, Dr. Jim Yong Kim, at the Fragility Forum’s opening plenary.

While in Washington, the GWLP delegation members networked with several other high-powered women leaders outside of the Fragility Forum. They had the opportunity to meet H.E. President Catherine Samba Panza of the Central African Republic. They also visited Congresswomen Sheila Jackson Lee and Karen Bass on Capitol Hill. The delegation and the congresswomen shared their experiences in becoming women members of legislature. The seven women forged bonds of solidarity that day that serve as a testament to one of USAID’s core objectives for the GWLP program.

WIP and NDI will set up a third delegation of female Members of Parliaments to attend the Habitat Summit in Jakarta, Indonesia in July 2016.