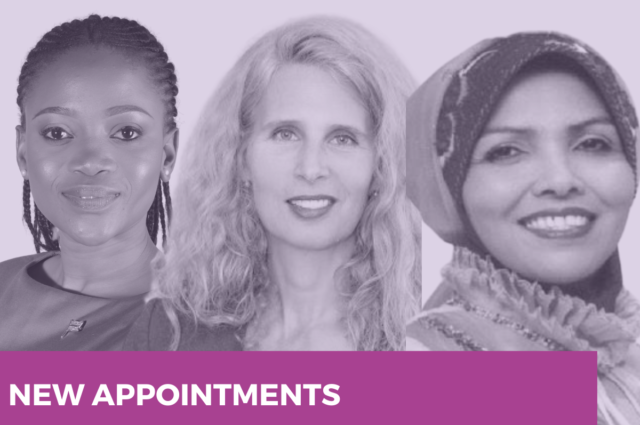 As part of a larger effort to work closely with G7 and G20 governments and ensure that the voices of women politicians are well heard, Bogolo Joy Kenewendo, Member of Parliament and Minister of Investment, Trade and Industry in Botswana (2016-2019), has been appointed WPL Special Envoy to G7 & G20. “The G7 & G20 countries should lead in an inclusive economic bounce back through well targeted Covid-19 economic crisis recovery plans and policies. It is important that leaders commit to the integration of measurable gender equality indicators in the design and implementation of these recovery plans and policies,” said Kenewendo. She was a trade economist in the Ghanaian Ministry of Trade and Industry and an economic consultant at Econsult Botswana, a Gaborone-based think tank. When the United Kingdom assumed the presidency of the G7 in 2021, Kenewendo was appointed to the Gender Equality Advisory Council (GEAC).

Nurhayati Ali Assegaf, Member of the House of Representatives of Indonesia (2004-2019), President of  Geneva Council for International Affairs & Development and Member of the WPL Board has been appointed WPL Global Ambassador for Sustainable Development Goals (SDGs). “The SDGs remain the best framework to massively scale up international cooperation to end poverty, protect the planet, ensure good health and well being, for everyone by 2030,” Ali Assegaf stated. During her first term (2004-2009) Dr. Assegaf was appointed Special Staff to the First Lady of the Republic of Indonesia. Earlier in her career, she was the Managing Director of the Business and Financial Consultant, Assegaf & Partners Ltd.

Jennifer Blanke, a renowned development economist with over 25 years of experience, will contribute as a WPL Senior Advisor. “I’m delighted to lend my support to the important and exciting work of WPL to harness the collective intelligence and energy of women leaders around the world for more sustainable and inclusive societies.” Blanke previously served as Vice-President for Agriculture, Human and Social Development of the African Development Bank Group as well as Chief Economist of the World Economic Forum.

As high-level contributors, the new appointments will draw on their international experience to advocate and support the organisation’s mission to increase the number and influence of women in politics.

Women Political Leaders (WPL) is the global network of women politicians. The mission of WPL is to increase both the number and the influence of women in political leadership positions. WPL members are women in political office – Presidents, Prime Ministers, Cabinet Ministers, Members of Parliaments, Mayors.

Bogolo J. Kenewendo is a global economist with deep expertise in international trade and development. She has a particular focus on Pan-African development and a passion for accelerating digitization and innovation across the continent. As the Minister of Investment, Trade and Industry in Botswana, she implemented reforms to significantly improve the ease of doing business, open up both domestic and international markets, and position the country to succeed in the global value chains as well as the digital economy. During her tenure, she was the youngest Cabinet Minister in Africa and in Botswana’s history. She has received global recognition for her work, being appointed as a member of the G7 Gender Equality Advisory Council, a Non-Resident Fellow at the Center for Global Development, a member of United Nations Secretary-General António Guterres’ High-Level Panel on Digital Cooperation and group on Financing for Development, a member of the World Economic Forum (WEF) Global Future Council on Global Public Goods in the Fourth Industrial Revolution, and a WEF Young Global Leader. She currently serves as Managing Director of Kenewendo Advisory, an economic development consultancy company and sits on multiple corporate boards.

Jennifer Blanke is an expert on economic development who serves as a non-executive board member in not-for-profit and development-focused entities. She is former Vice President for Agriculture, Human and Social Development of the African Development Bank Group, based in Abidjan, Cote d’Ivoire where she was responsible for overseeing the Bank’s strategy, lending and programming for a significant share of the Bank’s activities. These included sectoral oversight for agriculture and agroindustry; water management and sanitation; and education and healthcare, as well as the cross-cutting themes of job creation and gender empowerment. Prior to that she was Chief Economist at the World Economic Forum, in Geneva, overseeing economic research activities and analysis and represented the World Economic Forum externally on key global economic issues (with a particular focus on economic development and inclusive growth). Before joining the World Economic Forum she worked as a management consultant in the banking and financial sector for Eurogroup (Mazars Group) in Paris.

Assoc. Prof. Nurhayati Ali Assegaf, M.Si., MP, was a member of the House of Representatives of Indonesia and Chairwoman of the Committee for Inter Parliamentary Cooperation of the House of Representatives of Indonesia. She is also the President of the Geneva Council for International Affairs and Development (GCIAD), and a member of the Executive Board of Women Political Leaders (WPL). In 2017, Assoc. Prof. Assegaf became the Chair of the World Parliamentary Forum on Sustainable Development (WPFSD) held annually in Bali, Indonesia, as the first-ever world parliamentary forum on SDGs. Under her leadership, in 2018, the 2nd WPFSD has successfully adopted the “Bali Commitment”, which was followed in the 3rd WPFSD in 2019 by the “Bali Roadmap”, which aims to continuously scale up efforts to raise awareness among world parliamentarians on the importance of SDGs achievements. She has been the Chair of the Inter Parliamentary Union’s (IPU) Coordinating Committee for Women Parliamentarians for two consecutive terms and was also the IPU Chair for the Committee to Promote Respect for International Humanitarian Law for the period of 2017-2019. She is currently an Associate Professor in the Faculty of Economics and Administrative Science, Ankara Haci-Bayram Veli University, Ankara, Turkey.