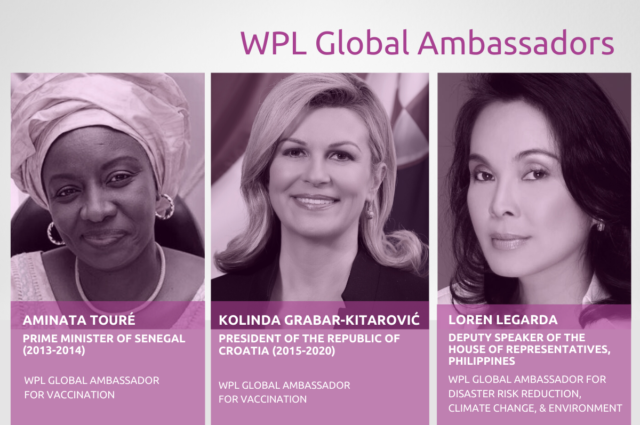 5 April 2021, Brussels – Women Political Leaders announces the appointment of three prominent leaders as WPL Global Ambassadors, who will contribute their expertise and knowledge to help drive global discussions on issues such as vaccination and climate.

Aminata Touré, Prime Minister of Senegal (2013-2014), has been appointed WPL Global Ambassador for Vaccination. She is currently serving as a special envoy to President Macky Sall of Senegal for Internal and External Affairs.

“In the context of the COVID-19 pandemic, it is in the interest of all that universal access to vaccines becomes a reality to all human beings, irrespective of their social or economic status. Because until everybody is safe, nobody is safe,” Aminata Touré stated.

Kolinda Grabar-Kitarović, President of the Republic of Croatia (2015-2020), has been appointed WPL Global Ambassador for Vaccination.

“Vaccination is one of the most affordable, simplest, widely available, and most efficient ways to build resilient societies. Not only is vaccination one of the universal human rights with respect to access to health – it is also our obligation to protect others,” said Kolinda Grabar-Kitarović.

She is first woman elected to her country’s highest office, as well as the first woman to hold the highest ranking position at NATO, where she served as Assistant Secretary-General for Public Diplomacy from 2011 until 2014.

For her compelling vision of a safer, greener world for all, Loren Legarda, Deputy Speaker of the House of Representatives in the Philippines, has been appointed WPL Global Ambassador for Disaster Risk Reduction, Climate Change & Environment.

“Disaster risk reduction and climate change adaptation and mitigation are critical responses that would spell the difference between survival and human extinction in this era of climate emergency. Our collective resolve and responsiveness to the increasing threats of a warming planet are key to ensuring a climate-resilient and sustainable future,” said Ms. Legarda.

As high-level representatives of WPL who hold influential positions of political leadership, WPL Global Ambassadors draw on their international experience to advocate and support WPL in its mission to advance positive change and progress for the betterment of society.

About WPL
Women Political Leaders (WPL) is the global network of women politicians. The mission of WPL is to increase both the number and the influence of women in political leadership positions. WPL members are women in political office – Presidents, Prime Ministers, Cabinet Ministers, Members of Parliaments, Mayors.

About Aminata Touré
Prime Minister of Senegal (2013-2014). Dr. Amanita Touré holds a PhD in International Business Administration and Finance from the University of Burgundy. She was Director of the Gender and Human Rights World Department of the UN Population Funds in New York (2009-2012), having previously served as a UNFPA Senior Adviser in Burkina Faso (1996-1997) and Côte d’Ivoire (1998-2001) and as Senior Adviser at UNFPA Headquarters (2003-2009). As Minister of Justice and Attorney General for Senegal (2012-2013), she focused on anti-corruption campaigns, and she continues to act as special envoy of the President of Senegal for Internal and External Affairs. During the 2018-2019 academic year, Dr. Touré held the position of Harvard Kennedy School Fisher Family Fellow with the Future of Diplomacy Project. From 2019 to 2020 she served as President of the Economic Council of Senegal. Her areas of expertise include Economy, Good Governance, and Gender, having worked extensively in the latter at UNFPA, where she led more than 30 publications. Dr. Touré is currently a member of the Council of Women World Leaders.

About Kolinda Grabar-Kitarović
President of the Republic of Croatia (2015-2020). Kolinda Grabar-Kitarović began her career in 1992 at Croatia’s Ministry of Science and Technology. Beginning in 1997, she worked as Counsellor at the Croatian Embassy in Canada, then as Minister-Counsellor and Deputy Chief of Mission, as well as Minister-Counsellor within the Ministry of Foreign Affairs (2001-2003). She was elected a Member of Parliament in 2003 and was sworn in as Minister of European Integration, then as Minister of Foreign Affairs and European Integration. The major objective of her term was to lead Croatia on its path to Euro-Atlantic integration. In 2008, Ms. Grabar-Kitarović became Ambassador of the Republic of Croatia to the United States. Three years later, in 2011, she was appointed NATO Assistant Secretary-General for Public Diplomacy; she held that position until 2014 and was the first woman Assistant Secretary-General in NATO history, as well as the highest ranking woman in that organisation. In 2019, she became the Chair of the Council of Women World Leaders.

About Loren Legarda
Loren Legarda has been Deputy Speaker of the House of Representatives of the Philippines since 2019. She served three terms in the Philippines Senate, where she became the first woman Majority Leader as well as the only woman to top two Senate elections. Ms. Legarda was primarily responsible for the passage of the following laws, which she either authored or co-authored: the Anti-Violence Against Women and Children Act; the Magna Carta of Women; the Anti-Child Labor Law; the Anti-Trafficking in Persons Act; the Food and Drugs Administration Act of 2009; and the Climate Change Act (along with its amendatory law providing for the creation of the People’s Survival Fund, the Enhanced Basic Education Act of 2013, and the Universal Healthcare Act). Ms. Legarda also pursued a long career in journalism, receiving more than 30 major awards. As a journalist, she proved to be a strong environmental advocate and activist against climate change.