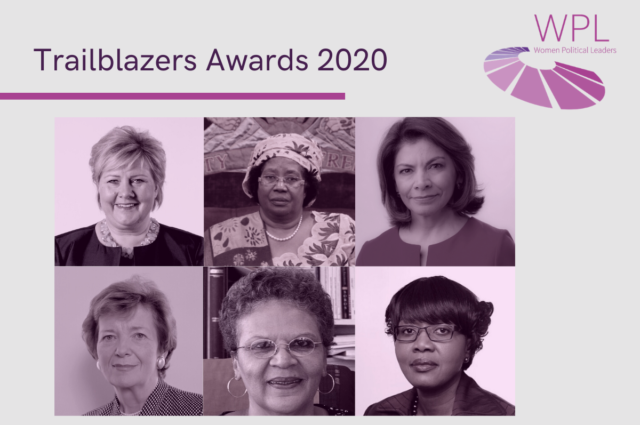 The Women Political Leaders Trailblazer Award 2020 recognises the outstanding achievement of six women Presidents and Prime Ministers who are paving the way for others by breaking the glass ceiling. Every year, they are presented on the occasion of the Reykjavík Global Forum – Women Leaders, which took place this year, on 9-11 November.

The 2020 WPL Trailblazer Award recipients are:

“It is also a much-appreciated encouragement to continue to work with the WPL and all of you for more gender equality and more women in leadership positions.”

“I am convinced that, now more than ever, the world needs compassion and commitment from women leadership in order to build back more equitable and inclusive societies.”

“The fight for climate justice must be done with holistic solutions in mind (…) that tackle the problem at the root in order to bring forward a just, equitable, and proactive future.”

“I accept this award with humility, because in these times of uncertainty caused by the pandemic, climate change, and political instabilities, women leaders all over the world should continue to uphold democratic values.”

“By acknowledging female Leaders who are paving the way to face the new challenges of today, the WPL Trailblazer Awards show that it is possible to break the glass ceiling. Nothing can be more impactful for future generations of female Leaders than the experiences of accomplished political Leaders,” noted Silvana Koch-Mehrin, President & Founder of Women Political Leaders, when presenting the awards at a virtual ceremony during the Reykjavík Global Forum – Women Leaders, 9-11 November 2020.