2020: Ensuring the role women in Peace and Security is high on the agenda 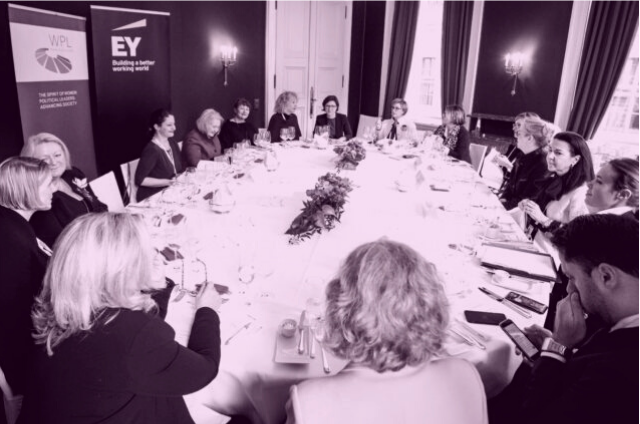 Strengthening the role of women in building Peace and Security is  a priority for WPL, and in February 2020, the Munich Security Conference – the leading global forum for defence and security – brought the opportunity to host a high-level roundtable of women political leaders who offered insight and expertise on the world’s most pressing security threats. The vital contributions of female political leaders to this sector were made clear, along with the stark reality that much still needs to be done on the path to equal participation by women. Distinguished panelists such as Clare Hutchinson, Special Representative for Women Peace and Security at NATO, Ekaterina Zakharieva, Deputy Prime Minister for Judicial Reform and Minister of Foreign Affairs of Bulgaria, Hanna Serwaah Tetteh, Special Representative of the Secretary-General to the AU, Minister of Foreign Affairs and Regional Integration to the Republic of Ghana (2013-2017), Melanne Verveer (Director of the Georgetown Institute for Peace and Security), Natalia Korolevska, Member of Parliament of the Parliament of Ukraine, Radmila Šekerinska, Deputy Prime Minister and Minister of Defence of the Republic of North Macedonia, only to mention a few, determined that 20 years after the adoption of UN Security Council Resolution 1325, persistent prejudice toward female leadership in this sector is most likely to respond to an evidence-based approach, supported by adequate funding.

The reflections upon the countless challenges that linger for women in peace and security of a group of women from the upper echelons of political leadership who had convened for the Power Together: Reykjavik Summit 2019 were published in the Höfði house report early in the year.

In an effort to reflect on  the disruptive potential of the virus, and very conscious of populist resurgences, WPL asked experienced experts in the diplomatic fields to come together on April 24th for the International Day of Multilateralism and Diplomacy for Peace, to contribute their constructive insights on peacekeeping, sustainable development, and women’s equality amid global contagion. Melanne Verveer (Director of the Georgetown Institute for Peace and Security), Susana Malcorra (Dean of the IE School of Global and Public Affairs), Irina Bokova (9th Director-General of UNESCO, 2009-2017), and Helen Clark (Chair of the WPL Board, Prime Minister of New Zealand, 1999-2008, and Administrator of the UN Development Programme, 2009-2017) were in agreement that, in order to restore trust in multilateralism, the global community requires an increase in women’s leadership.

The importance of restoring multilateral approaches to the agenda was again reaffirmed by Bineta Diop (Founder and President of Femmes Africa Solidarité and the African Union’s Special Envoy on Women, Peace and Security), who spoke with WPL about the repercussions of COVID-19 and multilateral action on the security agenda, both in Africa and globally.

With or without the pandemic, attacks on democratic rule have become commonplace. To examine the phenomenon of “Women Rising for Democracy”, WPL and Lithuania’s Ministry of Foreign Affairs co-hosted a webinar that included Svetlana Tikhanovskaya, opposition leader and candidate for President of Belarus in its 2020 election.